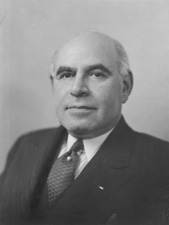 As Franklin D. Roosevelt’s lieutenant governor of New York from 1928 to 1932, Herbert H. Lehman (1878-1963) enjoyed some access to FDR as president but seldom used it. In the early 1930s, Lehman occasionally sent the president information about the plight of Germany’s Jews. In 1935, he wrote to the president asking him to permit an increase of German Jewish immigration to 5,000 annually, even though that was still only about one-fourth of what the German quota permitted; Roosevelt replied that the figure was already close to that point. In 1939, Lehman endorsed the Wagner-Rogers bill to admit 20,000 German Jewish children outside the quotas.

In general, however, Lehman refrained from speaking out publicly concerning the persecution of the Jews. He refused to support the 1930s boycott of German goods, and in 1938 he rebuffed a request to promote unauthorized Jewish immigration to Palestine, on the grounds that it would embarrass America’s ally, England. Speaking at a 1942 rally organized by the American Jewish Congress at Madison Square Garden, then-Governor Lehman was roundly booed when he said he opposed calls for creation of a separation Jewish army to fight the Nazis.

In 1943, Roosevelt named Lehman chairman of the United Nations Relief and Rehabilitation Administration, which was responsible for postwar relief of civilians harmed in battle zones.