Actor Marlon Brando (1924-2004) was one of the first public figures in post-World War II America to speak out about the failure of the Allies to aid Europe’s Jews during the Holocaust.

In the summer of 1946, the 22 year-old Brando co-starred in “A Flag Is Born,” a controversial play authored by Ben Hecht, and sponsored by the Bergson Group’s American League for a Free Palestine.

Set in a cemetery in postwar Europe, “Flag” focused on two elderly Holocaust survivors, Tevya (Paul Muni) and Zelda (Celia Adler), who encountered Brando’s character, a distraught young Treblinka survivor named David, while on his way to British-ruled Palestine. Through the conversations between Tevya and David, Hecht articulated the Jewish right to the Holy Land and the need for a Jewish state 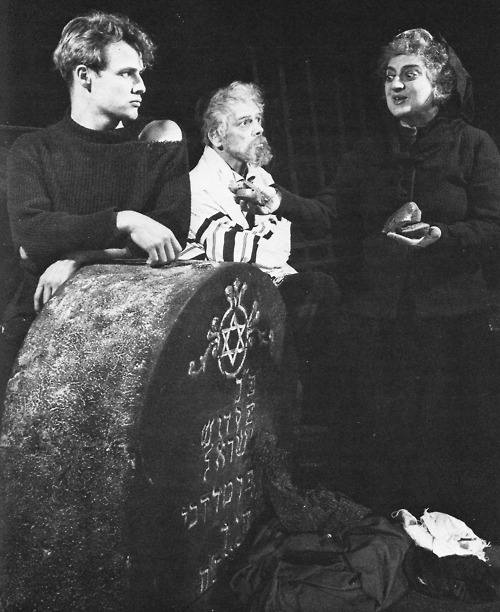 The Allies’ failure to rescue Jews from Hitler was one of the play’s underlying themes. As the story begins, the narrator declared: “Out of his burning houses, out of his crematoriums and lime pits, the Jew of Europe looked on a murderer called the German. But beyond this murder face of the German were other nation-faces to be seen–dim and watchful faces whose silence was a brother of murder…When the six million were murdered in the furnaces and gas chambers of the German, these cries were in their throats: ‘Where is Humanity? Where is the goodness of man that we helped create? Where are my friends?’ ” 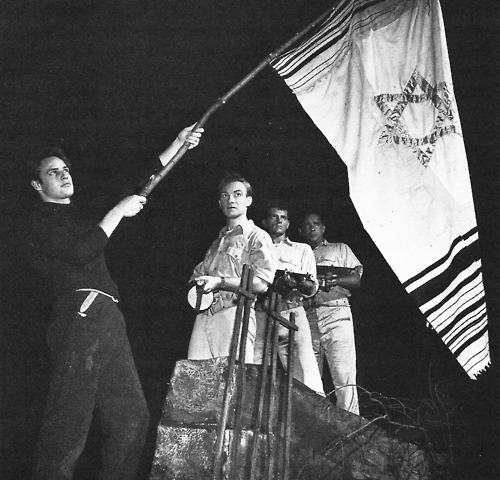 During the play, Brando’s character spoke of the world’s silence while the Nazis “made a garbage pile of my people.” He also raised pointed questions about the response of Jews in the Free World. One of the most memorable scenes has Brando’s character addressing the Jews of the United States and Great Britain. Beginning in a quiet voice and then growing louder, Brando demands: “Where were you, Jews? Where were you when the killing was going on?… Where was your voice crying out against the slaughter? We didn’t hear any voice. There was no voice. You Jews of America! You Jews of England! Strong Jews, rich Jews, high-up Jews; Jews of power and genius! Where was your cry of rage that could have filled the world and stopped the fires? Nowhere! Because you were ashamed to cry out as Jews.”

The accusation “sent chills through the audience,” Brando later recalled. At some performances, “Jewish girls got out of their seats and screamed and cried from the aisles in sadness, and at one, when I asked, ‘Where were you when six million Jews were being burned to death in the ovens of Auschwitz?’, a woman was so over come with anger and guilt that she rose and shouted back at me, ‘Where were YOU?’ … At the time there was a great deal of soul-searching within the Jewish community over whether they had done enough to stop the slaughter of their people– some argued that they should have applied pressure on President Roosevelt to bomb Auschwitz, for example–so the speech touched a sensitive nerve.”

Although the words Brando spoke in the play were written by Hecht, Brando shared the playwright’s assessment of how the world responded to the Holocaust. In his memoirs, Brando described how he learned about Jewish issues from Hecht and especially from his acting coach, Bergson Group activist Stella Adler. He quickly developed a strong sympathy for their cause, and performed in “A Flag is Born” at the minimum actors’ guild wage as a gesture of solidarity.

Brando championed the Jewish cause offstage, as well. Brando not only performed in the play, but became, as he put it, “a kind of traveling salesman” for the Bergson Group, speaking at numerous rallies and meetings about the international community’s silence during the Holocaust, the plight of Holocaust survivors languishing in Europe’s Displaced Persons camps, and the need for a Jewish state.