Rabbi Dr. Arthur Hertzberg (1921-2006), a prominent Jewish leader and civil rights activist who took part in the 1963 March on Washington with Rev. Dr. Martin Luther King, Jr., also participated in the 1943 rabbis’ march to the White House. Writing about that experience, in the introduction to an online exhibit by The David S. Wyman Institute for Holocaust Studies, Hertzberg described how, at age 22, he accompanied his father, Rabbi Zvi Elimelech Hertzberg of Baltimore, to the march. He recalled: “I saw their tears and heard their sobs…I cried among them and I could not stop–not that day and nor for many days to come.” 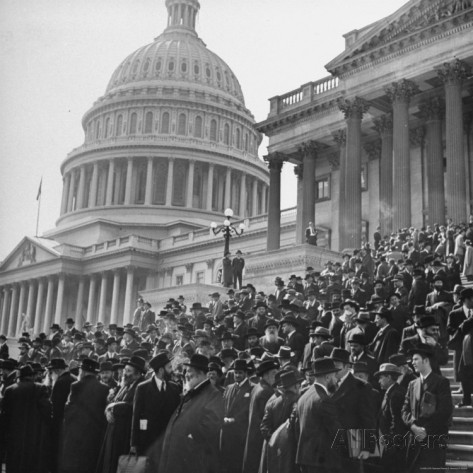 “This was a different kind of rabbinic gathering,” Hertzberg wrote. “These rabbis were not clean-shaven or well-dressed. They were avowedly East European. They represented not ‘American types’ from the posh synagogues. On the contrary, they might just as well have been the rabbis whom Hitler was then putting in death-camps along with their congregants. They were standing at the gate of the White House begging the president to see them and to do something for the Jews who were being slaughtered by the tens of thousands. I could not get up to the fence of the White House so I had to look on from the park across the road. Eventually someone came out of the White House. He took a letter from the rabbis to the president, but the president himself never greeted them. We were soon told that several of his Jewish advisers had told FDR that these immigrant rabbis were not the official leaders of the Jewish community….All of us who had been there that day left feeling very bitter; America was our last great hope. If the president of the United States could not take the lead in this effort, or more precisely, if he chose not to be identified with the kind of activist effort that the rabbis were requesting, where could we now go?….The rabbis were right to go that day in 1943 to the gate of the White House. They were right. Those who advised Franklin D. Roosevelt not to see them continue to bear their shame.”

The experience haunted Hertzberg. In 1971, he was invited to a state dinner at the White House for the first time. “Walking up the stairs toward the dining room, I found myself speaking in Yiddish to [presidential aide] Leonard Garment,” he recalled. “My wife turned around with a look of surprise. I told her later that, as we were ascending the stairs to the formal dining room, I suddenly remembered the scene thirty years earlier, when [the rabbis] had not been admitted to the White House. [The dinner invitation in 1971] did not really help the grief that I remembered. In 1943, when it mattered, a Yiddish-speaking Jew was not acceptable in the White House.”