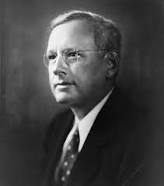 As governor of Kansas, Alf Landon (1887-1987) was an early critic of the persecution of Jews in Nazi Germany, publicly condemning “the inhuman treatment now accorded the Jews in Germany” in 1933. By contrast, President Franklin D. Roosevelt did not raise the plight of German Jewry at any of the 82 press conferences he held that year, nor at the next 348 press conferences he held between 1933 and 1938.

Although Landon received just 15% of the Jewish vote when he was the Republican nominee for president in 1936 and the despite the fact that Jews comprised less than one half of one percent of the state’s populace, he continued to take an interest in Jewish affairs. He publicly endorsed the 1939 Wagner-Rogers bill, which would have permitted the immigration of 20,000 German Jewish refugee children outside the quota system.

Landon remained an important force in the Republican Party throughout the 1930s and 1940s, but mainstream Jewish leaders nonetheless refrained from building ties with him, out of loyalty to President Roosevelt. More militant factions in the Jewish community did not feel such political constraints. In the early 1940s, the U.S. wing of the Revisionist Zionists, led by Benzion Netanyahu, decided to establish their own ties to former President Herbert Hoover, Gov. Landon, and other leading Republicans.

Landon called the Revisionists’ position paper demanding mass European Jewish immigration to Palestine and immediate creation of a Jewish state was “the most excellent statement on this great problem that I have ever read.” Landon volunteered for “active service in this highly important humane cause.” He served as keynote speaker at a Revisionist gathering in New York City, helped recruit prominent Republican speakers for some of their other events, and had a hand in the decision to include a pro-Zionist plank in the 1944 Republican Party platform, which Netanyahu and his colleagues had been advocating.