Liberation of the Death Camps 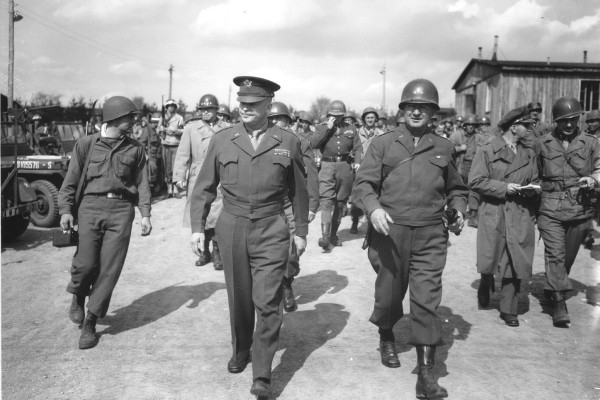 The Allied armies dashing toward Berlin in the spring of 1945 stumbled upon Germany’s extensive network of concentration camps. But when America’s newspapers, radio broadcasters, and newsreel editors reported the liberation of the camps, they almost never mentioned their Jewish inmates.

Newspapers and newsreels were filled with images of emaciated survivors and piles of corpses. These reports underscored the depths of Nazi depravity, but they did little to illuminate Hitler’s victimization of the Jews, because they described concentration camp victims as citizens of various nations, and as political and military opponents of the Nazi regime–but not as Jews imprisoned or murdered their because of their Jewishness.

In early April 1945, small, inside stories began appearing in the nation’s newspapers describing what Allied soldiers had found first at several small camps and then climactically at Buchenwald, Bergen-Belsen and Dachau. They found “ashes and arms and legs” at Ohrdruf; “3,000 living skeletons and 2,700 unburied bodies” at Nordhausen; and “typhus, typhoid, tuberculosis, nakedness, starvation” at Belsen. What they did not find, at least according to the news stories, were Jews. Ohrdruf’s inmates were “European captives,” and Nordhausen’s were “Allied and political prisoners.” Belsen held “persons interned for political or `criminal offense’ ” whereas Langenstein had “Polish, Russian, French, Belgian, Netherland and Czechoslovak inhabitants.”

By the middle of April, the news had migrated to the front page, yet Jews were featured no more prominently. The New York Herald Tribune, the New York Times, and the Washington Post, for example, ran 24 front-page stories about the camps’ liberation but only one, a May 1 Post story, referred to Jews on page one. Similarly, all three newspapers ran many photographs of the liberated camps, but none of the captions mentioned Jews as among either the dead or living.

One reason Jews were overlooked by the media was that many of the inmates in these particular camps were not Jewish. The camps situated on German soil held a higher proportion of political prisoners, common criminals, forced laborers, Gypsies, and POWs, than the camps in Poland, such as Auschwitz and Maidanek, which the Russians liberated months before. In addition, fewer Jews had survived until the day of liberation. As a result, in some camps in Germany, Jews were only about ten percent of the surviving inmates.

But some camps in Germany had very large numbers of Jews. At Belsen, nearly 40,000 of the 55,000 surviving inmates were Jews. Yet, the American press still ignored or downplayed their presence. Only in the 19th paragraph of a 21-paragraph story did the Washington Post, for example, note the assumption that a high proportion of Belsen’s inmates were Jews. The New York Times explained that many of the 30,000 Jews who had passed through Buchenwald had been sent to Auschwitz to be killed when they could no longer work, but only in paragraphs 31, 32, and 33 of a 37-paragraph story.

Even when Jews were mentioned, the reason they were imprisoned and murdered –because they were Jews– was not. As they had throughout the war, the Allied military authorities, who ran the camps once the Germans fled, preferred to universalize the tragedy rather than emphasize the more horrible fate of the Jews, lest they be accused of showing favoritism to one group. So inmates were described as active opponents of the Nazi regime, rather than helpless men, women and children who had been persecuted solely because of their Jewishness.

Finally, the end-of-the-war press coverage did not awaken Americans to the Holocaust because the media did not tell the stories of individual Jewish survivors. The dead were presented as “dumps of unburied corpses in vast heaps,” and the living as an undifferentiated, barely human mass of “living skeletons” and “wretched remnants.” Almost no quotes, comments or life histories of the inmates were included that could have overcome such dehumanizing descriptions. The camp coverage also attests to how thoroughly journalists accepted, perpetuated and even accentuated the government’s propaganda line that the overall war effort was all that mattered.

During the previous six years, the American press published thousands of articles about the extermination of the Jews–nearly 1,200 in the New York Times, for example. On the rare occasions the news appeared on page one, the victims were almost never referred to as Jews. When the camps were liberated, the institutional mind-set that conceived of the Jews as just one among many suffering peoples was still in place.

The German atrocities were thus presented and understood at the highest level of generality, that of evil run amok in the world. But the mounds of corpses and the emaciated bodies, obscured more particularized stories, including that of the Jews, or any individual Jew. Millions were murdered, but who they were and how and why they died was almost completely lost. The nascent notion of genocide, of an attempt to destroy an entire religious, ethnic, or racial group, in this case the Nazi genocide of the Jews, did not immediately take hold.

The failure of the press to recognize the Holocaust in its immediate aftermath affected public attitudes and American policies toward the survivors huddled in poorly-run displaced persons camps, toward the war crime trials, including the one in Nuremberg that began later that year, and toward demands for a Jewish state in Palestine. It also helped delay for decades public discussion of one of the twentieth century’s defining events, leading to claims that there was “a period of amnesia,”in which the Holocaust became “virtually invisible.”

Based on what the American public was told by the mainstream media about the liberation of the camps, the problem was not that the Holocaust was forgotten. The problem was that it was never really discovered.