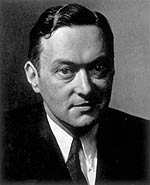 Although he was one of the most influential and widely-read journalists in America during the 1930s and 1940s, syndicated columnist Walter Lippmann (1889-1974) refrained from writing about the persecution of Europe’s Jews.

Born to a wealthy, assimilated German Jewish family in New York City, Lippmann believed that Jews should hide their Jewish identity, an attitude that may have been reinforced by the discrimination he suffered as a student at Harvard and later in elitist New York society. Writing in The American Hebrew in 1922, Lippmann argued that “rich and vulgar and pretentious Jews” who “rush about in super-automobiles, bejeweled and furred and painted and overbarbared” were “the real fountain of antisemitism.”

In a column about a May 1933 address by Adolf Hitler, Lippmann praised the Nazi leader as “statesmanlike” and “an authentic voice of a genuinely civilized people.” He also seemed to be justifying the persecution of the Jews, arguing that the Jews were serving as “a kind of lightning rod which protects Europe” because oppression of German Jewry was “satisfying the lust of the Nazis who feel they must conquer somebody.”

The closest Lippmann came to addressing the plight of the Jews was in two 1938 columns about what he called Europe’s “over-population” crisis. Although never using the word “Jews.” evidently he was referring to them when he asserted that the root of the problem was that there were “too many shop keepers, professional men, artists and intellectuals.”

Lippmann was one of a group of American journalists who met with Polish Underground courier Jan Karski in 1943, and heard his eyewitness account of Nazi atrocities against Jews. While others who took part in the meeting wrote about Karski’s report, Lippmann did not.