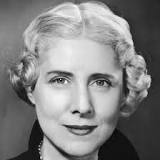 A child actress, then a successful playwright and journalist, Clare married the influential publisher of Time, Life, and Fortune, Harry Luce, in 1935. She served as a Life correspondent in war zones in Europe and Asia in 1940-1941, then was elected to the House of Representatives, from Connecticut, in 1942.

Under the influence of the Christian Zionist Pierre van Paassen, Luce became active with the Bergson Group and the U.S. wing of the Revisionist Zionist movement. She served as a co-sponsor of Bergson’s July 1943 Emergency Conference to Save the Jewish People of Europe and gave the keynote address at an April 1944 Revisionist event in New York City, in which she charged that the British blockade of Palestine-bound Jewish immigration was to blame for the fact that “Jewish blood stains the blue Mediterranean red.” The Revisionists printed excerpts from her speech in large advertisements in the New York Times and New York Post.

The following month, Luce introduced a congressional resolution calling for creation of temporary havens in the U.S. for refugees. “For 11 years now Americans have been deploring” the persecution of the Jews, but “while we deplored and lamented, millions of refugees were savagely murdered,” she said. “Others escaped death only to wander as refugees across the face of a world which was sympathetic but coldly inhospitable. They have life but no place to live.”

Luce served on the resolutions committee of the June 1944 Republican national convention and helped bring about the adoption of its unprecedented platform plank supporting creation of a Jewish state.