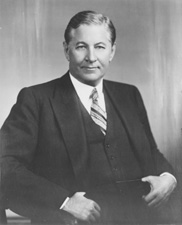 Murray was an unlikely ally of the Jews. He was elected to the senate on a platform pledging “one hundred per-cent support” for President Franklin Roosevelt and the New Deal, and thus was not naturally inclined to challenge the president’s refugee policy. Moreover, his state had less than 2,000 Jewish residents–barely one-third of one percent of the populace–and isolationist sentiment was rampant. The state’s other U.S. senator was Burton Wheeler, a supporter of the extremist America First movement. Another Montana congressman, Rep. Jacob Thorkelson, openly spouted antisemitism from the floor of the House of Representatives, railing against “communistic Jews” and “Jewish international financiers.”

Murray, by contrast, became an active supporter of the Bergson Group’s Emergency Committee to Save the Jewish People of Europe and was a co-sponsor of the Bergson-initiated Congressional resolution in late 1943 which urged FDR to create a government agency to rescue Jews from the Holocaust.