A newspaper reporter who later become a professor at the Columbia University School of Journalism, Pringle won a Pulitzer Prize for his 1931 biography of Theodore Roosevelt. He served as chief of the publications division of the Office of War Information in 1942-1943. 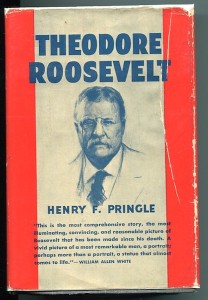 In the spring of 1943, Pringle played a role in the decision of the White House to refrain from sending a message of greeting to the opening night performance of the Bergson Group’s “We Will Never Die” protest pageant. He argued that such a message “would raise a political question.”

Soon afterwards, however, Pringle experienced a change of heart and, after leaving his position at OWI, became involved with the Bergson Group. In October 1943, Pringle accompanied Bergson to a meeting with Assistant Secretary of State Breckinridge Long, at which Bergson proposed sending Pringle to Turkey as a U.S. emissary to facilitate the rescue of Jewish refugees. Long rejected the suggestion.

Sources: Feingold, The Politics of Rescue, p.222;
Wyman, The Abandonment of the Jews, p.90.