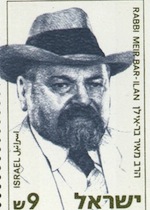 Rabbi Meyer Bar-Ilan (1880-1949), the Jerusalem-based leader of the Religious Zionist movement, visited the United States in 1943 and took part in important meetings with government officials and American Jewish leaders.

Bar-Ilan’s three-day mission to Washington in February of that year illuminated the difficulties of trying to influence U.S. policy on refugees and Palestine. He found Senator Alben Barkley (D-Kentucky), the Senate Majority Leader “quite unfamiliar” the plight of Europe’s Jews and the Jewish claim to Palestine.

Rabbi Bar-Ilan (then known by his original family name, Berlin) told Senator Robert Wagner (D-New York) that “if horses were being slaughtered as are the Jews of Poland, there would by now be a loud demand for organized action against such cruelty to animals. Somehow, when it concerns Jews, everybody remains silent, including the intellectuals and humanitarians of free and enlightened America.”

Nonetheless, Wagner was “lukewarm” on matters of Jewish concern, insisted he had “no influence” regarding the British White Paper that closed Palestine to most Jewish refugees, and tried to change the subject to the status of Jews in the Soviet Union, whom he claimed were “well situated.”

The “most disappointing” of the rabbi’s meetings was with Vice President Henry Wallace. The vice president disagreed with Bar-Ilan’s statement that Europe’s Jews were “threatened with total extinction.” He declined to endorse Jewish statehood, on the grounds that some American Jews were themselves against Zionism. In his diary, Wallace accused Bar-Ilan of having “a very poor sense of time and place.”

Bar-Ilan appeared to have better luck with the one Republican congressman he met, House Minority Leader Joseph Martin, of Massachusetts. Martin promised to “do whatever possible” to facilitate a congressional resolution about European Jewry, and would “try to do his very best” to press the British on Palestine. He did not, however, take a leading role in subsequent congressional initiatives on those issues.

During his stay in the United States, Rabbi Bar-Ilan took part in a number of meetings of two major Jewish coalition groups, the Joint Emergency Committee for European Jewish Affairs and the Emergency Committee for Zionist Affairs. There he repeatedly pressed for greater activism by the Jewish leadership. In one meeting, he “complained bitterly about the indifference, inadequate action and lack of feeling [about European Jewry] on the part of American Jews compared with the Palestine Jews,” according to the minutes of the session. At another meeting, he pressed for a concerted public campaign against the White Paper. “He pointed out” –perhaps having in mind his experiences in Washington– “that many people in political life here were ignorant of the significance of the White Paper and that plans should be made to provide the necessary information.” He also urged that the issue “be brought the attention of the President.”

After returning to British Mandatory Palestine in early 1944, Rabbi Bar-ilan held a press conference in which he criticized the established Jewish organization and praised the Bergson Group for organizing rallies for rescue, mobilizing 400 rabbis to march to the White House, and placing ads in U.S. newspapers about the plight of European Jewry. He said the Bergsonites had done much to “awaken the conscience of the American people.”