During the 1930s, boxing champion Barney Ross (1909-1967) became wildly popular among American Jews, who saw him as an antidote to the stereotypical image of Jews as physically unfit. Later Ross publicly championed the cause of rescuing Jews from the Holocaust and establishing a Jewish state.

When his father was murdered in a holdup on Chicago’s West Side in 1923, 14 year-old Barney (born Dov-Ber Rasofsky) turned to boxing to earn money for his mother and five siblings. He eventually won the lightweight, junior welterweight,and welterweight championships, in a career that saw him victorious in 77 of 81 bouts. Ross retired from the boxing ring in 1938, but was back in the public eye just three years later, when, at age 32, he enlisted in the U.S. army after Pearl Harbor. In the battle of Guadalcanal, Ross was seriously wounded while rescuing injured comrades from a Japanese ambush. His battlefield heroics earned him a Silver Star.

Upon his return to the United States, Ross became a prominent supporter of the Bergson Group’s Emergency Committee to Save the Jewish People of Europe. Ross boosted the group’s March 1944 “Show of Shows” fundraising event at Madison Square Garden, by announcing that he was personally paying for the tickets of 150 U.S. servicemen to attend.

Ross also became active in another Bergson committee, the American League for a Free Palestine, which sought to rally American support for the creation of a Jewish State. He spoke at its public rallies and served as leader of its George Washington Legion, which recruited American volunteers to aid the Irgun Zvai Leumi, the Jewish underground militia fighting the British in Mandatory Palestine. The Legion was patterned on the Abraham Lincoln Brigade, which had recruited Americans to fight against Franco in the Spanish Civil War. One of the group’s newspaper ads featured a photo of Ross with this message from the boxing champ: “There is no such thing as a former fighter. We must all continue the fight.”

In 1947, a group of St. Louis Jewish gangsters associated with reputed mob boss Mickey Cohen agreed to hold a fundraiser for the American League for a Free Palestine, on one condition–that the League provide Ross as the keynote speaker. In their eyes, the former boxer was the living symbol of Jewish toughness. League officials later estimated that thanks to Ross, the event brought in more than $100,000 for the cause of Jewish statehood. 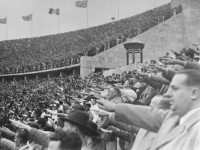