Yitshaq Ben-Ami (1914-1985) helped smuggle Jews from Europe to Palestine in the 1930s, then became one of the leaders of the Bergson Group’s campaigns in the United States for rescue of refugees and Jewish statehood.

Born and raised in Tel Aviv, Ben-Ami studied at Hebrew University before joining the Irgun Zvai Leumi underground militia in 1932. The Irgun sent him to Europe in 1937, where he spent two years organizing transports of Jewish refugees to Palestine in defiance of British immigration restrictions. On a number of occasions, he negotiated with Adolf Eichmann and other Nazi leaders concerning details of the emigration effort, which the Hitler regime encouraged.

In early 1939, Ben-Ami traveled to the United States to mobilize financial and political support for the Irgun’s unauthorized immigration campaign. Together with Robert Briscoe, a Jewish member of the Irish parliament, and the famous British Christian Zionist and lion-hunter Lt.-Col. John Henry Patterson, Ben-Ami set up a small organization in New York City called the American Friends of Jewish Palestine.

Ben-Ami was surprised by what we found in the American Jewish community. “My image of a rich, generous Jewish community with a proud and strong ethnic consciousness was quickly deflated,” he later wrote.

When the Sakariya, an Irgun- organized ship carrying 2,000 refugees fleeing Hitler, became stranded on the freezing Danube River in early 1940, Ben-Ami and Newman managed in just a few days to raise the $10,000 necessary to rescue them.

The arrival in the United States, in 1940, of several of Ben-Ami’s Irgun comrades Hillel Kook (soon to be known as Peter Bergson) Samuel Merlin, and Alex Rafaeli reinvigorated Ben-Ami’s American Friends, which in 1941 changed its name to the Committee for a Jewish Army of Stateless and Palestinian Jews and focused exclusively on the cause of convincing the Allies to create a Jewish army to participate in the fight against the Nazis.

Ben-Ami organized chapters of the Jewish army committee around the country, particularly in Philadelphia, where he spent much of 1941-1942.

When the Allies confirmed, in late 1942, that the Germans were carrying out the systematic mass murder of Europe’s Jews, the committee set aside its Jewish army campaign and focused its attention on trying to bring about U.S. action to rescue Jewish refugees. It was Ben-Ami who suggested to the Hollywood screenwriter Ben Hecht, one of their most prominent supporters, that he use his talents as a dramatist to “break through the apathy and wariness of the Jews of America” with regard to European Jewry. “The reports about the Nazis’ attacks on Jews were hidden away as small news items in the back pages with the religious news, next to the obituaries, as if Hitler himself had chosen the location,” Ben-Ami later recalled. “In good company, the word ‘Jew’ was spoken quietly, the way it had bee in Vienna in early 1938.”

Hecht recruited an all-star cast for his protest pageant, “We Will Never Die,” which packed Madison Square Garden for consecutive performances and then was performed in other cities, bringing the slaughter of the Jews to national attention. The Bergson Group, as it was becoming known, also began placing full-page advertisements in major newspapers to rouse public interest in the plight of the Jews. “We were always on the verge of bankruptcy,” Ben-Ami later wrote. “Every ad was paid for with whatever the preceding one generated, and our small offices were maintained on a shoestring budget.”

Ben-Ami was also deeply involved in organizing the group’s July 1943 Emergency Conference to Save the Jewish People of Europe, and the march to the White House by 400 rabbis in October. His work with the group was cut short, however, when he and another senior Bergson Group activist, Alex Rafaeli, were drafted into the U.S. Army. After basic training in Alabama, Ben-Ami’s unit was sent to Italy and then France, where they took part in the Battle of the Bulge. 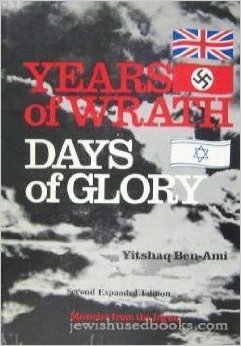