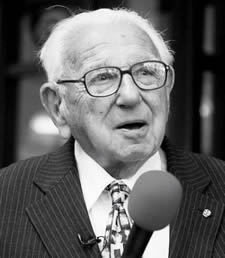 British stockbroker Nicholas Winton rescued more than 600 Czech children, most of them Jews, and brought them to England in 1939 after the Roosevelt administration refused to admit them to the United States.

Winton was the son of turn-of-the century German Jewish immigrants to London who had changed their name from Wertheim and converted to Christianity. He stumbled into refugee work through friends who shared his outrage over the November 1938 Kristallnacht pogrom. Winton arranged the transport to England of 669 Czech children, most of them Jews, and found families to take them in. One final group of 250 children was scheduled to depart from Prague on September 1, 1939, but they were trapped when the Germans invaded Poland that day, and all of them were eventually murdered in the Holocaust.

Many years after the war, when Winton’s story became known, he was honored by both the British and Czech governments for his rescue efforts. A statue in his honor was erected at a British railway station in 2010.

In early 2014, the CBS-TV program “Sixty Minutes” aired a segment about Winton’s rescue work, including an interview with Winton himself. He mentioned that in 1939, he wrote a letter to President Roosevelt, asking the United States to accept some of the children. “But the Americans wouldn’t take any, which was a pity,” Winton said. “We could’ve got a lot more out.” As a result of the broadcast, a staff member at the National Archives in Washington, D.C., searched for and located the original letter, as well as the Roosevelt administration’s response. Copies were presented to Winton in June 2014, on the occasion of his 105th birthday.

“Perhaps people in America do not realize how little is being done and has been done to refugee children in Czechoslovakia,” Winton wrote. “[T]here are thousands of children, some homeless and starving, [who] all have one thing in common: there is no future, if they are forced to remain where they are…Is it possible for anything to be done to help us with this problem in America?”

The answer was “no.” The White House handed the letter off to the State Department, which in turn instructed the U.S. embassy in London to inform Winton that “the United States Government is unable…to permit immigration in excess of that provided for by existing immigration laws.”

The annual quota of Czech immigrants, 2,874 was indeed almost filled in 1938-1939, although in all the other years from 1933 to 1945, it was less than one-fourth filled. Even in 1938-1939, refugees could have been temporarily admitted to a U.S. territory, such as the Virgin Islands. However, there is no indication that the administration considered permitting the children to go to either the United States or a U.S. territory temporarily.