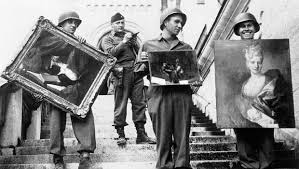 During World War II, the Roosevelt administration established a government commission, nicknamed the Monuments Men, to rescue historic paintings and monuments in war zones. Refugee advocates urged the administration to take a similar interest in rescuing Jews from the Nazis.

In May 1943, shortly after the ill-fated Allied conference in Bermuda on the refugee problem, the New York Times published an editorial titled “Europe’s Imperiled Art.” It urged government action to rescue “cultural treasures” from the battle zones. The following month, the Roosevelt administration announced the establishment of a U.S. government commission “for the protection and salvage of artistic and historic monuments in Europe.”

President Franklin D. Roosevelt asked Supreme Court Justice Owen Roberts to chair the commission. Two months earlier, Roberts had turned down FDR’s request to chair the U.S. delegation to the Bermuda conference, on the grounds he could not spare the time. However, he readily agreed to chair the new team for rescuing artifacts, which came to be known as the Monuments Men.

Some refugee advocates openly questioned the administration’s priorities. In full-page advertisements in the New York Times and elsewhere, the Bergson Group declared that the establishment of the monuments group was “commendable…It shows the deep concern of the [Allies] toward the problems of culture and civilization. But should [they] not at least show equal concern for an old and ancient people who gave to the world the fundamentals of its Christian civilization, the Magna Carta of Justice–the Bible–and to every generation some of its most outstanding thinkers, writers, scholars and artists? A governmental agency with the task of…saving the Jewish people of Europe is the least the [Allies] can do.”

In the autumn of 1943, the Bergson Group’s allies in congress introduced a resolution urging the president to create a commission to rescue Jews. At a hearing on the resolution, New York City Mayor Fiorello La Guardia pointed to the creation of the monuments commission: “This very important problem…is not like the destruction of buildings or monuments, as terrible as that may be, because, after all, they may be rebuilt or even reproduced; but when a life is snuffed out, it is gone; it is gone forever.”

The Roosevelt administration dispatched Assistant Secretary of State Breckinridge Long to Capitol Hill to testify against Bergson’s rescue resolution. Long declared that the United States was deeply concerned about the Jewish refugees, but after all, “you cannot send a regiment in there to pull people out…” They did, however, send in U.S. personnel to pull paintings out, critics noted.

In early 2014, George Clooney directed and starred in a dramatic movie, “The Monuments Men,” which brought the story to wide public attention and turned the book on which it was based into a national best-seller. Neither the book nor the film devoted more than a passing attention to the Jewish refugee issue.